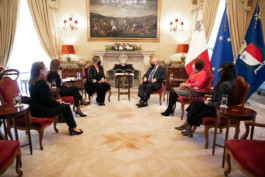 Campaigning for the Equality Model in Malta: An update from Malta Women's Lobby

This is an update of our current experience working here in Malta for the campaign regarding the way forward with equality laws concerning prostitution. This is being done in collaboration with EWL and MWL as part of the Brussels` Call campaign for a Europe free from prostitution.

Government in Malta has been advocating and working for decriminalising prostitution; however, we are aware and recognise that if such laws are implemented, this will only further harm the women and girls caught in such trajectories, whilst only benefit pimps and traffickers. Hence, we are forcefully working towards the implementation of the Equality model instead, as we acknowledge that this will help and assist women and girls who are being exploited and coerced into such pathways. We argue that prostitution is all about gender inequality, is derived due to lack of opportunities, poverty, addiction, and childhood trauma. It is a struggle for power and control on behalf of the buyer over the seller. We therefore demand that such oppression is stopped, and exit services, including the provision of equal opportunities for every individual is the only approach to achieve an equal future.

Knowing very well that this campaign would have been stronger through other networks outside our country, we were more than pleased to embark on the Brussels` call campaign together with all the other European countries also working towards this goal. Together we are stronger! The support and guidance received from the EWL has been truly encouraging and highly beneficial.

We recognised the importance of building a well-balanced team through the diverse experiences and skills we all carry through our different walks of life. The combination of academic research, artistic skills, including the experience of directly working with women in prostitution, have all been truly fruitful and effective along this campaign.

Together we developed a policy document addressing prostitution issues locally, and the concerns and harms that would arise if Government were to legalise prostitution. We also carried out a survey questionnaire which was circulated locally in order to have a statistical review of the public`s opinion. Furthermore, we also carried out interviews with women caught in prostitution so to present qualitative results together with the quantitative data. We believe that these narratives will enrich and compliment the statistical results providing a more robust outcome.

A meeting with H.E. George Vella President of Malta was set on the 22nd of February 2021. The approach we adopted for this event was shaped on a discussion basis which resulted to be a success. Meeting in person and discussing this issue in an informal manner proved to be truly productive and effective. The president was interested, understanding, and supportive of our campaign. Surprisingly, the meeting lasted much longer than we had expected.

Several press releases were issued in all local newspapers, including debates on tv programmes – these are found as per below links. Since we also form part of the Coalition on Human Trafficking and Prostitution, we also issued other press releases on behalf of the coalition.

In parallel with the campaign, we update daily articles and issues regarding the harms of prostitution on the MWL Facebook page with the aim to further raise awareness amongst the public.

Frequent meetings are being held with SOFIA - a group of young feminists who fall under the umbrella of MWL. The members are contributing with innovative ideas, and some members will also be attending our media programmes.

For mid-April through May, we will have weekly webinar programmes which will be held consecutively on the largest local fb platform: Women for Women (Malta). Experts, academics, and professionals in the field will address several issues surrounding prostitution, such as the historical context, the false glamourisation of prostitution, the cultural context, the grooming of society, objectification and sexualisation of women and girls, including laws of prostitution, the correlation between prostitution and human trafficking, and the application of the Equality Model.

In addition to these programmes, we have contacted and are working with local influencers who will sit for a photo shoot with a professional local photographer who also agreed to join our campaign. After meeting with them, they will be invited to reflect and come up with their own message regarding prostitution which will be displayed in their photoshoot. These will be uploaded on the MWL fb page and shared on other social media platforms. Some of the influencers will also be brand ambassadors to our campaign, they will advocate for the cause and the implementation of the Equality Model. Additionally, we are working on different products which will serve as advertising material for the campaign with “I am your equal; not for sale.”

In line with targeting MPs, we also have tv and radio programmes planned to discuss our campaign. These platforms will serve as a means of reaching out to the public in raising awareness and the realities of the harms of prostitution.

This has been our colourful and energetic journey so far, including other plans we are currently working on, and others in the pipeline. To date, this experience has been a deeply enriching one, it has been based on determination, unity, and the same goal – the hope for equality, to end violence against women and girls, for a better future, one where everyone is considered equal, and where everyone is provided with equal opportunities. We are proud to be part of the Brussels` Call Campaign for a Europe free from prostitution!

This website uses cookies to improve your experience while you navigate through the website. Out of these cookies, the cookies that are categorized as necessary are stored on your browser as they are essential for the working of basic functionalities of the website. We also use third-party cookies that help us analyze and understand how you use this website. These cookies will be stored in your browser only with your consent. You also have the option to opt-out of these cookies. But opting out of some of these cookies may have an effect on your browsing experience.
Necessary Always Enabled
Necessary cookies are absolutely essential for the website to function properly. This category only includes cookies that ensures basic functionalities and security features of the website. These cookies do not store any personal information.
Non-necessary
Any cookies that may not be particularly necessary for the website to function and is used specifically to collect user personal data via analytics, ads, other embedded contents are termed as non-necessary cookies. It is mandatory to procure user consent prior to running these cookies on your website.
SAVE & ACCEPT