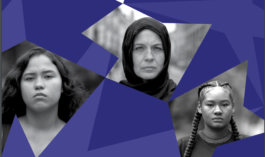 No woman left behind: calling on the EU to end sexual exploitation and trafficking

On  the International Day Against Prostitution, EWL launches the Her Future is Equal Briefing Paper, outlining the harms and reality of violence and oppression at the core of the prostitution system, and our proposals to prevent future harm.

As stated in the Paper, prostitution is estimated to affect one million women in Europe, 1/7 of which are trafficking victims, amounting to 140,000 women in total. These women face daily risks of violence, control and harm: a study has shown 95% of those  reported being victims of sexual harassment and 60-70% reported incidents of rape. Migrant women and girls and those who faced traumatic childhoods are vastly overrepresented in the sex trade, showing that prostitution is not only sexist but also racist and classist too, preying on the most vulnerable in society for men’s profit – whether financial or sexual.

We at EWL stand for an alternative vision of European society: a feminist Europe where all women and girls, regardless of their background and experiences, can live lives free from violence and exploitation – free from prostitution and trafficking.

We stand for the Equality Model, which works to ensure no woman or girls directly affected by prostitution faces criminal sanctions but instead can receive supports and justice – where demand is tackled and the male perpetrators and perpetuators of this violence are held to account and Governments send a clear message that they do not accept the reality of prostitution.

With this briefing paper, we call on the EU and its Member States to take a clear position against trafficking, sexual exploitation and all forms of male violence against women and girls in our societies. We call for the introduction of strong legislation tackling those who cause harm, and for investment in education, exit, health and financial supports to enable the 9/10 women and girls who want to leave prostitution to do so.

This year, the European Commission will introduce a proposal for a Directive on combatting and preventing violence against women and girls – this is a key chance for the EU to set new standards in tackling sexual exploitation!

This International Day Against Prostitution, stand with us and call for an end to prostitution and sexual exploitation!

The Her Future is Equal Briefing Paper can be read in full here.

This website uses cookies to improve your experience while you navigate through the website. Out of these cookies, the cookies that are categorized as necessary are stored on your browser as they are essential for the working of basic functionalities of the website. We also use third-party cookies that help us analyze and understand how you use this website. These cookies will be stored in your browser only with your consent. You also have the option to opt-out of these cookies. But opting out of some of these cookies may have an effect on your browsing experience.
Necessary Always Enabled
Necessary cookies are absolutely essential for the website to function properly. This category only includes cookies that ensures basic functionalities and security features of the website. These cookies do not store any personal information.
Non-necessary
Any cookies that may not be particularly necessary for the website to function and is used specifically to collect user personal data via analytics, ads, other embedded contents are termed as non-necessary cookies. It is mandatory to procure user consent prior to running these cookies on your website.
SAVE & ACCEPT